Each year in February, we celebrate the important legacy and contributions that Black Americans have made in this country, which have too often been overlooked. Given the current war on history, and decades of historical white-washing where African American stories and inventions were buried within the dates they were written, it does take some effort to overcome these challenges and discover African American history for yourself. However, as this writer will testify, it’s an important part of our own country’s makeup and given modern technology and the preservation of documents, it’s important to take the time to educate yourself on these fundamental truths about our collective history.

This year could prove to be one of the most significant Black History months to date, as President Joe Biden has vowed to nominate for the first time in our nation’s history, a Black woman to the Supreme Court, tackling inequality head-on – both through physical representation, and actual judiciary power.

I’ve seen several infographics since the announcement was made, however I think this one by @SlyngCartoons really helps to put this historical precedent into context: 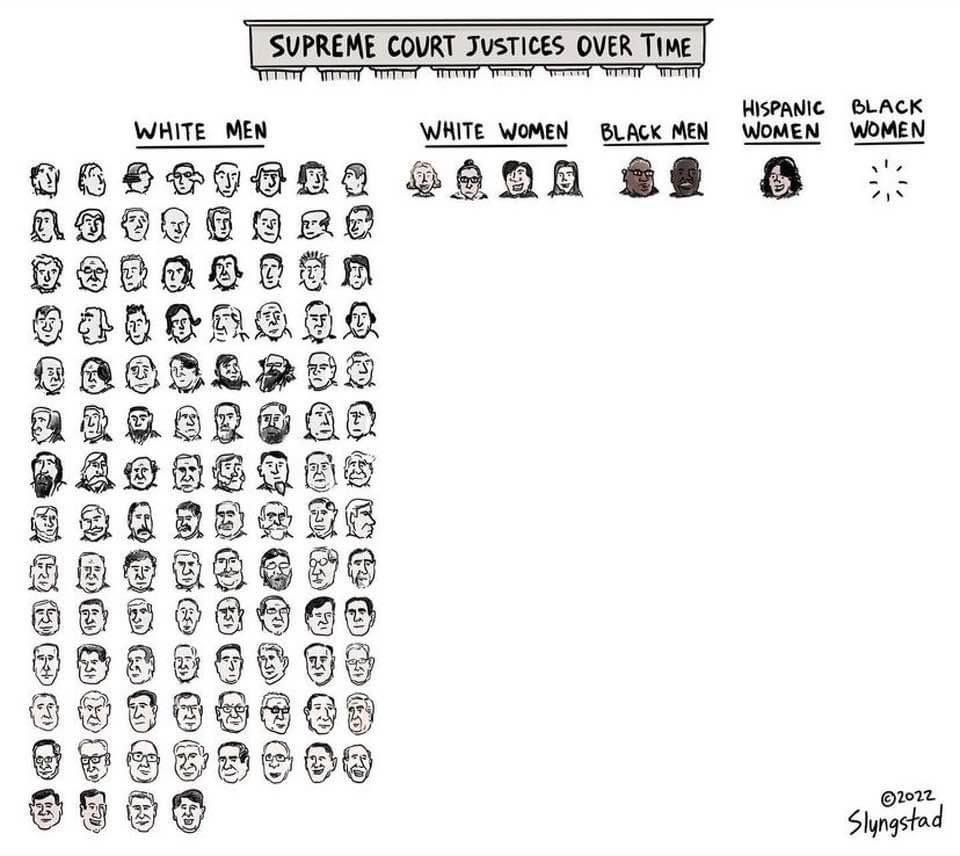 I like using tools like these that really help to paint the full picture in an easily digestible and visual way. Focusing on the info-graphic itself for just a moment, we can see that there has never before been a Black woman on the Supreme Court, even though according to the US Census, Black Americans make up roughly 13.4% of the entire US population (https://www.census.gov/quickfacts/fact/table/US/PST045221).

In terms of political representation, another key figure you may have heard of is current Vice-President, Kamala Devi Harris. Not nearly enough has been written about her historical candidacy and election to Vice-President, however being the first woman to achieve this role is nothing short of incredible, and she’s done a ton of work to further American progress on the world stage within her short time in this role thus far.

Focusing for a minute just on the importance of representation, let’s again turn to a familiar format – the infographic – which shows all of the former and current US Vice-Presidents, and demonstrates just how many female, and/or Indian, and/or Black Vice-Presidents we’ve had prior (I’ll give you a hint, the answer is none): Thanks to ABC News, you can check out the infographic and accompanying news segment, here: https://abcnews.go.com/Politics/video/kamala-harris-make-history-vice-president-75353167. According to senate.gov, there have been 51 total Vice Presidents in the US, and since only one has been a woman, and a woman of color, we can say that once again, less than 2% of those who have held this office have been Women or Black Americans – and looking again at US Census data, we know that this is certainly not representative of the total US population (51% of the US population is female; and 13.4% of US population is Black per the 2020 census; here: https://www.census.gov/quickfacts/fact/table/US/PST045221).

To learn more about her accomplishments prior to becoming the first Black, female VP in US history, check out the following links:

Now let’s review what her responsibilities have been, and what she’s done in this role to date. For starters, in order to measure her progress we need to know what Vice-presidents are typically responsible for – and thanks to Senate.gov, we know the following:

“During the twentieth and twenty-first centuries the vice president’s role has evolved into more of an executive branch position, and is usually seen as an integral part of a president’s administration. The vice president presides over the Senate only on ceremonial occasions or when a tie-breaking vote may be needed.

This helps us to frame her accomplishments as Vice President in a more accurate lighting – and makes her work thus far all the more impressive.

For example, the following link discusses five key areas in which Harris has made notable achievements while in office:

1) helping our central American allies in addressing migration; 2) ensuring that Biden’s nominees are confirmed in the Senate, including “Rachael Rollins, who is now the first Black woman to serve as U.S. attorney for Massachusetts. Harris also broke a tie to appoint Catherine Lhamon as assistant secretary for Civil Rights at the Department of Education”; 3) providing the tie-breaking vote on the American Rescue Plan; 4) becoming the First Acting Female President of the United States during a temporary transfer of power while President Biden underwent surgery; and finally making progress on Universal Voting Rights (https://blavity.com/5-major-accomplishments-from-kamala-harris-in-her-first-year-as-vice-president?category1=news&category2=politics&item=2).

It’s safe to say that in terms of racial makeup, our political offices and general population percentages have not aligned, however given the that the 44th president was a black man from Chicago, Barack Obama, and that our current Vice-President is a Black-Asian Senator from California, Kamala Harris, it appears we’re starting to trend in the right direction.

This month, we’ll focus on so much more than the racial makeup of the Supreme Court and Presidential and Vice-presidential offices – including inventions and key figures from the Black community that helped the United States become the country that it is today. We’ll once again delve into the important historical inventions pertaining to modern-day electricity and/or home improvements, but also explore African American history, outside of the energy-lens we normally focus on. So keep an eye out, and as always, feel free to add more context in the comments section!

On 11/19 Build Back Better Passes in the House Thanks to our partners at ACORE, there has been a lot of excellent work done in order to help pass Biden’s Build Back Better plan, which includes key legislation around renewable energy. Just this past week, this important package was passed the in the House of Representatives, and many hope to see it pass the Senate and head to the President’s desk for signature in the coming weeks. For a quick read on what is actually in this bill, please check out the following summary from ACORE regarding the Build Back Better bill, and which key elements they’re most excited about seeing addressed within it (directly below).

Highlights of the House Build Back Better Act Reconciliation Package

Reflecting a deal reached between the House Ways and Means and Senate Finance Committees, the bill includes five years of PTC and ITC extensions from 2022 through 2026, after which the Wyden tech-neutral clean energy production and investment credits will apply.

“Full value” credits are defined as a 20% base credit, with an 80% bonus credit for compliance with prevailing wage and apprenticeship requirements. (For example, the ITC base credit would be 6%, with the remaining 24% available as a bonus credit for complying with prevailing wage and apprenticeship requirements). This bifurcated credit structure applies to the PTC and ITC, as well as the Wyden tech-neutral extensions.

For the direct text from the Build Back Better bill, feel free to check out the pdfs on the following link: https://budget.house.gov/build-back-better-act, and let us know in the comments what you think!